Viscosity is a term that people in the plastic injection molding industry talk about quite often, so it is something we will discuss in more detail during the next three tech tips. Viscosity measures the thickness of a fluid. The thicker the fluid, the higher the viscosity. In other words, viscosity is resistance to flow. There are various methods used to measure viscosity and all three will be talked about in the upcoming tech tips, but this tech tip will start with capillary rheometers.

One type of capillary rheometer is shown in Figure 1. Plastic pellets are put into a small cylinder and heated to a desired temperature. A small piston, or ram, is then placed in the cylinder and the computer tells the drive system how fast to push the ram through the cylinder, thereby extruding plastic out of a small diameter capillary. Since the dimensions of the capillary are known and the flow rate and pressure are measured, the viscosity can be calculated by evaluating the shear rate and shear stress on the plastic. 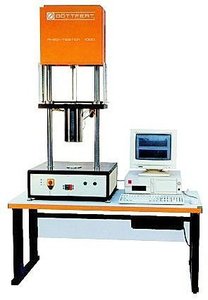 The test is conducted at several flow rates (shear rates) and temperatures. The data is collected and converted into a series of curves that attempt to tell us how the plastic’s viscosity is affected by shear rate and temperature (Figure 2). The unit for viscosity (y-axis) is typically Poise, Pascal-Seconds or psi-seconds. The unit for shear rate (x-axis) is reciprocal seconds (1/s). The tested shear rate and related data are then fit to various mathematical models which extrapolate the viscosity and shear rate relationship over shear rates commonly ranging from 1 1/s to over 100,000 1/s. As shown in Figure 2, the viscosity of a plastic reduces with increased shear rate. This flow characteristic is defined as pseudo-plastic non-Newtonian flow. 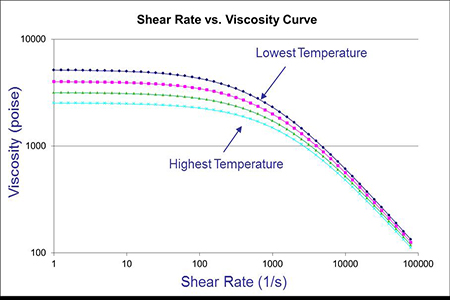 Capillary rheometers test the polymer over a wide range of shear rates and temperatures, which is needed to provide an idea of how the plastic reacts at the flow rates that may be found in an injection mold. The primary use of this data is within plastic flow simulation software, such Autodesk® Moldflow®, Sigmasoft®, and Moldex3D.

The graphs do provide a wealth of information, but can be overwhelming when trying to decipher it all and put it into practical use on the shop floor. In addition, the graphs are normally displayed in a log-log format which increases the difficulty when evaluating the data because the scales are not linear. Autodesk Moldflow attempts to reduce some of the confusion by including a Viscosity Index for the materials in their database. The Viscosity Index (VI) provides a single point reference viscosity at a designated temperature and a shear rate of 1,000 1/s. For example, VI (240)125 means that the material has a viscosity of 125 Pascal-seconds at a shear rate of 1,000 1/s and a temperature of 240°C.

Despite providing good information as to how a material reacts to shear rate and temperature, it has little use as many people are not familiar with terms such as Poise or Pascal-Seconds or reciprocal seconds. Even if these terms are familiar, the data sees little use as it is quite abstract without the coupled thermal calculations used in mold filling simulation programs. In addition, this type of data is not readily available on material specification sheets, and it is relatively expensive to have each material characterized. As such, our industry has migrated toward a second method that we will be discussing in our next tech tip – Melt Flow Index.