If you work in the injection molding industry long enough, at some point in your career you will be sure to hear someone say “turn the mold 90 degrees (or 180 degrees) to see if the problem changes”. And when asked why on earth would that person suggest such a thing, the answer usually is “because gravity is pulling the plastic down to the bottom of the mold”. At this point everyone gets a good laugh and makes fun of the person who suggested such an absurd solution. But are plastic materials immune to Isaac Newton’s Law of Universal Gravitation? No. Then why is it considered absurd to think that gravity could not influence the filling of a plastic part made by the injection molding process?

The simple answer is that gravity always acts on the material but its influence is heavily influenced by wall thickness. A majority of plastic parts are considered “thin walled”. In this situation, the relatively thin walled channels, high viscosity fluid and high pressure- driven flow assures that the plastic is nearly always in intimate contact with the cavity walls. This intimate contact causes the polymer to freeze/stick to the cavity walls. Couple that with the fact that the molding process is done under very high speeds and pressures, we simply don’t expect to see much influence, or at least any measurable amount of influence, of the gravitational pull on the majority of molded parts.

But there are molders who make plastic parts that have thick wall sections. And depending on the wall thickness, the material being molded, the process conditions, the cavity orientation, gate location, and a few other factors, gravity may finally have a chance to work its magic on our plastic parts. After all, if there is nothing for the plastic to stick to as it comes out of the gate then the plastic will fall to the bottom of the cavity. As an example, simply observe what happens when you purge out the barrel of a molding machine. There is nothing for the material to stick to outside of the nozzle, so gravity takes over (Figure 1). 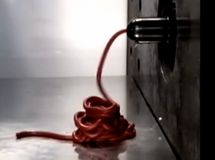 That is an extreme case, so let’s take a look inside a few injection molds to make this more relevant. The first example will be the mold that John Beaumont built to first study the effect of shear on filling variations. The cavities were designed to be “purge pockets” (Figure 2) with a thickness of 19mm (.750”). As shown in Figure 3, it was observed that the plastic flowed to the bottom of the cavities but not the top (note the relative location of the plastic versus the gate, which was centered per Figure 2). This was due to the thickness of the purge pockets and the fact that the plastic had little to stick to as it came out of the gate. 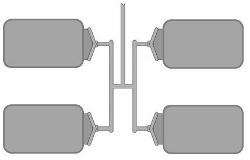 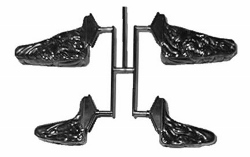 The second example comes from a mold producing thick walled screw driver handles. The short shot in Figure 4A shows how gravity is pulling the plastic to the bottom of the bottom four cavities, thus causing a cosmetic defect for those four cavities. The top four cavities are filling as expected with no cosmetic defects present. This filling pattern was also observed in a filling simulation which was setup to represent a short shot of this mold (Figure 4B). 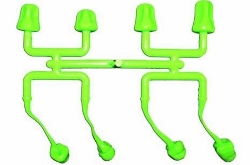 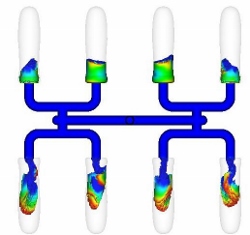 The mold was then turned 90 degrees and, after the laughter turned to amazement, the problem went away. Figure 5A shows the results (molding black handles instead of green). However, gravity’s influence did not completely go away. Figure 5B shows how the material is still biasing the bottom half of the cavity. But regardless the filling was much improved and the cosmetic defect was resolved with the new mold orientation. Figure 5C shows the simulation output with the new orientation.

Just to be clear again…gravity will have very little influence over the majority of injection molded plastic parts and its effect can be ignored. However, under the right conditions, gravity can certainly alter the filling of a mold and the resultant part quality. A mold designer for thick walled parts may want to keep this in mind as the cavity orientations are determined. Otherwise, the molder may unnecessarily find themselves chasing their tail.

Quiz: The 4-cavity mold shown in Figure 6 produced think-walled gas-assist molded automotive handles oriented as highlighted. The mold uses a cold runner with one gate per part. The bottom two cavities, 6 and 7, produced acceptable parts. The top two cavities, 5 and 8, produced unacceptable parts due to a visible flow-line on one end of the part. How would you expect the filling pattern to vary between the top and bottom cavities relative to the part shape, and what would you suggest to resolve/avoid the problem? Email us at info@beaumontinc.com with your thoughts.