Hesitation will occur in parts where there are variations in wall thickness. As the plastic advances through a cavity and reaches a location where there is both a thin and thicker region (such as a rib projecting off the primary wall of a part), the thinner region will provide more flow resistance and therefore the melt entering it will slow down.   The melt flowing through the thicker region will continue at a faster flow rate.  As the melt slows in the thin region it will cool more rapidly which increases its viscosity. Additionally, the reduced velocity will reduce shear rate and thereby also increase the viscosity due to the non-Newtonian characteristics of polymer melts. The combined result is that the melt quickly becomes more viscous and the frozen layer grows. These combined influences compound and exaggerate the slow down (hesitation) to where the material may freeze off.

Relating this to the following pressure drop equation, the viscosity increases ( η )from non-Newtonian shear thinning and becoming colder. Additionally the wall thickness ( h )  is effectively reduced due to a thickening frozen layer : 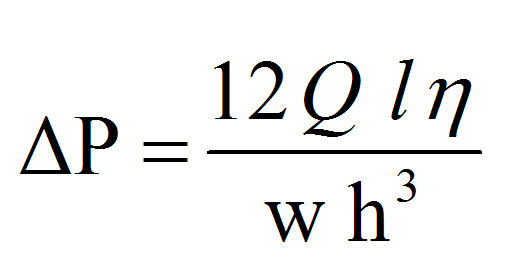 A change in pressure is expected whenever the viscosity changes or the flow channel thickness (or diameter) changes. Pressure will increase when there is a reduced thickness. As the material hesitates, it will slow down and possibly prematurely freeze,  thereby producing a short shot. If the part hesitates, but is able to make a full part, then there may be more internal stresses.

In order to avoid hesitation, keep a constant wall thickness or position gates as far away from the thin region as possible. This ensures that the flow does not have an alternative flow path that would create the hesitation. When the thinnest sections are at the end of fill, the melt can not hesitate and therefore has a better chance of filling.

In the image below, the part has two thin tabs on either end which have the same mold steel dimensions. Note that the thin tab on the opposite side of the part from the gate is able to fill as the melt has no alternate flow path when it reaches this location (i.e. the melt cannot hesitate). Meanwhile, the melt entering the thin tab next to the gate hesitated and froze off. 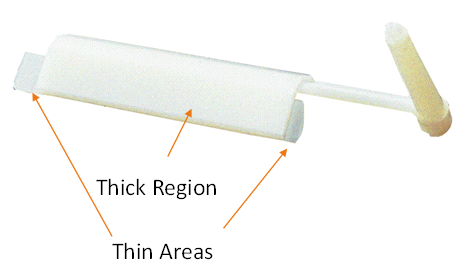