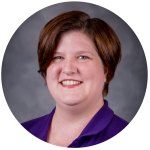 Gate Freeze: Is It Always the Gate?

It is not always gate freeze that dictates our ability to pack out a part. This article explores additional possibilities that could be causing your headaches. 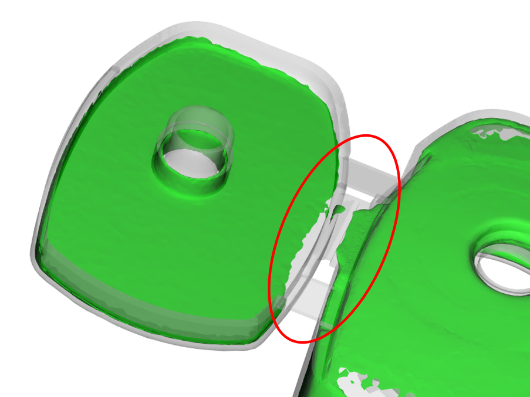 In this example to the left, we have a shampoo cap gated on the main body of the part. The living hinge predictably freezes before the thicker wall sections, therefore limiting the packing to the top half of the closure.

In the example to the right, the gate remains open, but the thin sections highlighted freeze off first. This inhibits packing to a large majority of the part, and results in high volumetric shrinkage – especially in the thickest regions that stay molten the longest.

If the feed system isn’t properly sized, there is a chance that sections of the feed system could freeze before the gate. In this example, the gate doesn’t freeze until 13.5 seconds into the cycle. If we take a closer look, the sprue actually freezes a few seconds before, again limiting the ability to pack the part. This example also has sections of the wall that freeze prematurely. Here, the wall thickness is uniform and the issue is instead caused by uneven cooling.

This example includes a few of the issues we previously mentioned. Can you spot them all?

The sprue is undersized and freezing off early. Even if the sprue inlet was increased, the nominal wall is beginning to freeze, further limiting packing capability to the thicker rim.

Diagnosing Issues on the Shop Floor 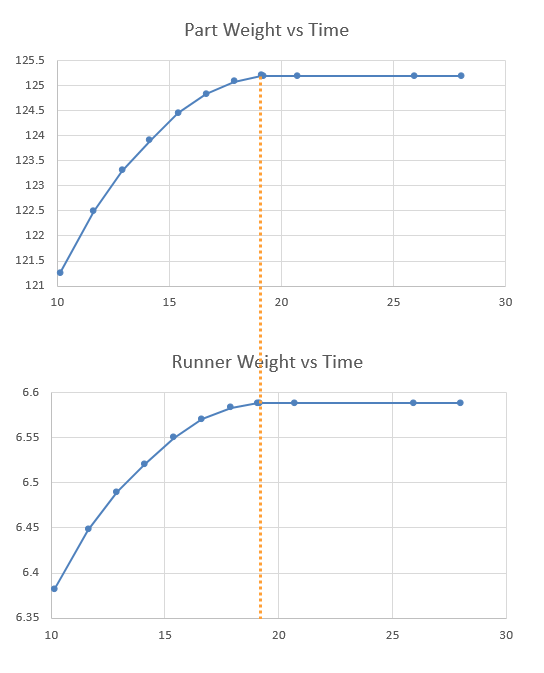 These issues can be easily observed with simulation. What if you haven’t run a filling simulation on your mold? This is why we would recommend also weighing the runners (separate from the part) when performing a gate freeze study on the molding floor. If both the part weights and the runner weights level off at the same time, that would indicate that the feed system is freezing first and limiting the packing.

In conclusion, it is not always the gate freezing that will limit your ability to pack the part. It is important to review all the components: sprue, runner, gates and part geometry. If we focus solely only on when the gate freezes, we could be missing critical information.